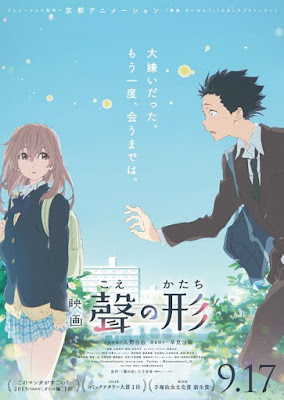 One of the most emotionally charged anime films ever made.

A Silent Voice revolves around elementary school student delinquent Shoya Ishida. When a hearing impaired girl Shoko Nishimya transfers to the school, she starts to get bullied, especially from Ishida. Several years later he meets her again and sets himself on a path to redemption by trying to make it up to Nishimya and to help reconnect her with her old classmates that she never had the chance to befriend.

A Silent Voice is an anime adaptation of the manga of the same name, sometimes translated to The Shape of Voice. The film is produced by Kyoto Animation and directed by Naoko Yamada who brought us K-On! and Tamako Market. On release in Japan the film opened at #2, directly behind mega hit 'Your Name'.

Tackling many different subject matters such as bullying, suicide, redemption, friendship and love. A Silent Voice is one of the most ambitious anime films ever made, without using giant robots or time travel or any type of fantasy, it achieves it's praise by focusing just on raw human emotions. Bullying is the main subject of the first act. Often shown lightly and during montages, some of these scenes are actually surprisingly amusing. But you soon realise that this poor girl is being bullied, and it's really not funny at all. Any feeling of amusement you had quickly changes to anger as Nishimya is tormented by her classmates. It's hard to think of an anime film that brings out so much feelings of outrage while you watch on helplessly. And that is ASV's main achievement, it captures and plays on your emotions to the fullest.

Yamada directs her film is a polarizing way with many subtle story telling elements which really need your full attention. There are many characters whose stories aren't fully spelled out or explained. There are choices such as the characters communicating in sign language which don't have any subtitles or voice overs. This leaves the viewer trying to piece together what the characters are expressing and how they feel. A Silent Voice also looks like it's going to be a romance. The posters and trailers make it look like a romance drama, but that's not the case at all. It's there if you look. But it's not the theme of the film. These are all elements which have divided critics and fans with many giving it paradoxical reviews. 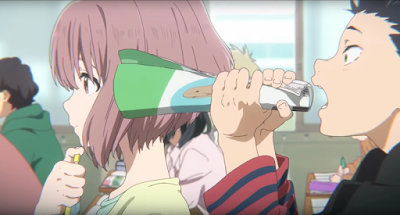 The films main shortcoming for me is the amount of underdeveloped characters. Without reading the manga, I can't compare the differences. But there are a few supporting characters who don't receive enough screen time or character development to the point you don't really understand their purpose. Apparently in the manga these characters are more developed, so one can assume these were trimmed for time constraints. But I couldn't help feel some of these characters could have been cut out completely. That being said, a real highlight is Tomohiro Nagatsuka, the loveable loser that Ishida befriends when his classmates isolate him. Nagatsuka offers some real comic relief to the sombre tone of the film. He seems hilariously overprotective of his friend which delivers some laugh out loud moments. And one scene with him smoking a french fry left my cinema audience roaring with laughter.

The animation style of the characters and backgrounds are completely stunning. Although there are animes out there with higher production values which might look technically better, A Silent Voice is bright and sparkling and beautiful to look at. The film's soundtrack is subtly perfect. It might open with a bang as My Generation by The Who kicks off the opening. The audio then transitions in to a lighter soundtrack with piano and soft musical scores which suits the underlying themes.

A Silent Voice is a must see for anime fans. It's not as rewarding a watch as recent emotional anime film hits like When Marnie Was There and Your Name, it's also not as accessible. But it does deliver something much deeper. It's one of the most powerful animations dealing with a subject that is more important than any film, life.

See this if you liked:
Your Name
Only Yesterday
Tamako Love Story

Coming to the UK from 15th March. Look for screening locations and dates on their official website here or check Anime Limited on Facebook.

I attended the screening of A Silent Voice at the Glasgow Film Festival on the 23rd February.