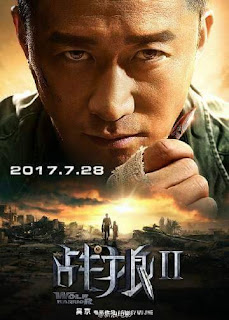 2017's surprise blockbuster hit Wolf Warrior 2 is one of those rare cases of the sequel not only being better than the original but surpassing the film in every single way.

After the events of Wolf Warrior, Leng Feng (Wu Jing), China's deadliest special forces operative settles into a quiet life on the sea. When sadistic mercenaries begin targeting nearby civilians, he must leave his newfound peace behind and return to his duties as a soldier and protector. A Chinese destroyer arrives to evacuate strictly Chinese civilians caught up in the middle of the civil war, but after overhearing guards talking about needing someone to rescue workers at a factory and an important doctor who knows the vaccination for Lamanla, Leng Feng volunteers.

Viewers will realise within the first few minutes if this film is for them. Kicking off with an immense fight scene between Wu Jing and Somali pirates which takes the fight into the ocean. Cleverly orchestrated, they are submerged underwater into one of the best underwater-fight scenes ever filmed, which is neatly edited to look like one take. It's fun, ridiculously over the top and sets the tone for what's to follow for the next two hours.

Many viewers and critics had issues with the original Wolf Warrior, mainly due to its propaganda feel and the fact it came across like a recruitment video for the Chinese army. This sequel essentially strips all that away. While still being highly Nationalistic, it actually works to the plot and doesn't feel quite as contrived. The film has less in common with The Founding of a Republic and it's more in line with a Chinese version of Rambo. Wu Jing directs the film, as well as starring once again. Wu has improved leaps and bounds as a director and this time he keeps the plot simple and straight to the point, which allows the story to flow without the need to ever over-complicate things. If at any time your mind starts to wander during some of the character development scenes, don't fret because there is another exciting action scene right around the corner.

The location of Africa is also a fresh setting for the series, while not explicitly stating which country the film is set in, it's only ever mentioned as Africa. The setting emerges the viewer right into the heart of Africa. Full of wild interesting locations, including the slums which play host to an exhilarating car chase. There's also the introduction of some very fun African characters. There is a touching relationship with a boy that Wu Jing becomes a godfather too. The boy and his mother are both hilarious characters and inject some humour into the violent action story. The stereotypes of some of the Africans may be bordering on offensive to some, but it all seems in good fun. 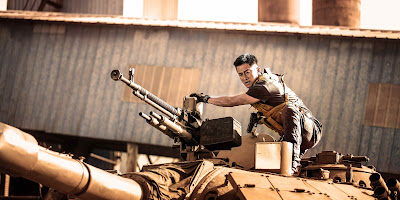 Wolf Warrior 2 is probably the best action film of the year thus far! It's filled to the brim with some breathtaking action scenes and set-pieces throughout. The action is on a huge scale and with great stunt work that would make a Hong Kong stuntman proud. There are highly intricate martial arts hand-to-hand fights which Wu Jing shines throughout. There are also plenty of shoot outs full of a wide variety of guns and tanks, topped off with knife fights and loads of explosions. Some of the action scenes are ridiculously over the top, such as Wu Jing stopping a bazooka in the most ridiculous yet entertaining way possible. But that's all part of the fun! Suspend your disbelief and have some fun. Although Scott Adkins is missing from the film, Frank Grillo steps up and plays an excellent villain. Grillo also helps deliver a brutally skilful final fight-scene with Wu Jing which doesn't disappoint at all.

Remain in your seat after the film is finished for a mid-credit Marvel-esque teaser scene that reminded me of a Coors Light commercial... And will give fans of the series something to look forward to.

Wolf Warrior 2 is a highly entertaining film. If you like your old school action films, this is for you. It's fun from start to finish and the action never lets up. Given all of this, it's really not a surprise that the film is doing so well at the box-office. As a side note; this is the first time in years, outside of festivals, that I've watched a film in the cinema that received a round of applause.